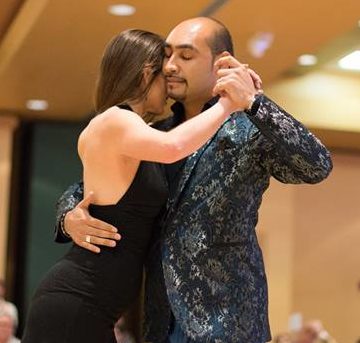 Santiago & Fernanda met in Santiago, Chile in 2007 when Fernanda took lessons from the prestigious Tango Academy (Libertango) that Santiago founded and directed in Chile. Then, Santiago left for Europe and Fernanda for the USA. They met again in December 2013 while both were visiting Chile and enjoyed dancing in the Chilean milongas. They decided to start as dance partners in 2015 and toured 12 cities of the US West Coast and Southwest. Highlights of such tour were being instructors
of Valentango Festival and Tucson Tango Festival.

Santiago is a true “Milonguero” Tango dancer. He is known not only for his elegance, precision and musicality in his dance style, but also for his methodology and pedagogical skills, constantly endeavouring to study more and more, and with a very versatile character that comes as a consequence of his passage through different tango styles, passion, dedication and respect for Argentine Tango. Santiago combines tango dance improvisation playing with the elegance of Salon style and the flavour of the Milonguero style. He is faithful and devoted to the kind of tango he believes is the authentic tango, i.e. the kind of tango which emphasizes the embrace, walking, music, the feeling, respect and codes. He not only nurtures his students to help them to become better dancers technically and aesthetically, but he also inspires them so that they can feel and understand tango not only as a dance, but as an attitude and a way of life. Educated as an Architectural Draftsman and Graphic Designer, Santiago keeps choosing tango as a profession and life philosophy. He is known for his charisma, professionalism, and creativity. He considers himself as a tango intellectual for his versatility and his fanaticism for new things or insatiable quest for body movements, inspired by his knowledge of all other dance styles.

After 20 years in the tango world, his dancing is the result of a journey made of two
basic ingredients: the passion for dancing and the love for teaching.
• Director and Choreographer of Tango Dance Company and School
“Libertango”
• Organizer of Tango festival ‘’SANTIAGO SE VISTE DE TANGO’’, in
Santiago de Chile.
• 2006 Latin-American Champion of Tango and Ballroom dances.
• Tour to Spain and France in March 2007
• Tour in Colombia in March 2010. Cali and Medellin
• Jury of the Municipal, Metropolitan and National championships in Chile
• Tango shows with orchestras such as Sexteto Mayor from Buenos Aires,
Orquesta del Viejo Almacén, Sexteto Real Calo, Animaltango, Alevare
Quinteto, Malevaje.
• 2 seasons on the ‘A TODO TANGO’ show run by Carlos Vásquez, UCV
Television.
• Tango coach for Municipal, Metropolitan and National championships, with
Chilean students reaching 1º, 2º and 3º rank in the Tango world
championship in Buenos Aires in 2007, 2008, 2009, 2010, and 2011.
• Coach of the champions of the 2013 Italian championship in category tango
salon
• Tour to Europe between February and May 2012: Switzerland, Italy, Turkey,
Sweden, France.
• He has danced in the most important milongas of Buenos Aires, such as
Sunderland, Canning, Porteño y bailarin, Viva la pepa.
• Tour Europe 2014 along with Carla Rossi, September and October.
• Tour Europe 2014 along with Virginia Pandolfi, November and December.
• Tour Europe 2015, along with Carla Rossi, April-May-June.
• Tour USA 2016, along with Fernanda Valdovinos, February-March-April
He has danced in his career along with: Yelly Zuñiga, Mirta Tiseyra, Flavia Morari,
Nicla Zonno, Robert Coen, Miriam Pastor, Liliana Roberts, Carla Rossi, Virginia
Pandolfi, Karina Colmeiro, Anita Ponce, Dorit Shalom, Fernanda Valdovinos, Mary
Smirnova, Nadia Cronidu.
Santiago currently lives in Italy. He speaks Spanish, Italian, and Tango English.

Fernanda combines the spiciness and sensuality of tango milonguero with the elegance and skilfulness of tango salon. She fell in love with tango in her home city, Santiago de Chile. In fact, tango was always present in Fernanda’s life because her grandparents danced tango and her granduncle sang tango in family reunions. At 20 years old, she more seriously dedicated to learn tango from top tango instructors in Chile and Argentina, including Santiago Castro, Paulina Cazabón & José Luis González, Carlitos Espinoza & Noelia Hurtado, Osvaldo & Coca, Santiago Croce, Karina Anton, Zoraida Fontclara, and Carlitos Pérez & Rosa Forte. She practiced Biodanza for 10 years prior, which gave her unique experience and perspective with the emotional and sensual aspects of dance. Tango since then has become Fernanda’s refuge, passion, art expression and lifestyle. Fernanda has deep respect for tango, its music, culture and codes. She is
committed to her students to connect with such culture while learning technique, musicality and never loose connection with the partner even when executing more complex steps and embellishments. Her teaching philosophy emphasizes tango culture, technique, connection and sensuality. Fernanda currently lives in Ann Arbor, Michigan where she is an Assistant Professor of Theoretical Ecology at the Department of Ecology & Evolutionary Biology and at the Center for the Study of Complex Systems of the University of Michigan. There she balances her tango life with her academic responsibilities of conducting research, getting grants, teaching university courses and supervising PhD students and postdoctoral researchers in her group.